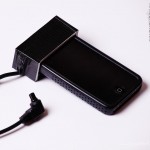 (See edit below regarding DSLRBot. A slightly more expensive solution, but quite a bit better…)

Recently I was awe-struck by a Time-lapse video by Terje Sorgjerd I saw which was shot around El Teide on Gran Canaria early in 2011. Looking around on the internet, I saw various solutions for time-lapse, including some very fancy rigs for moving the camera as it’s shooting the images. What I needed was something that could trigger my dSLR camera to take an image at regular intervals over a few minutes up to a few hours. The camera already has a port for a remote switch, so I needed some way to trigger that at regular intervals. There are solutions available as cheap as €50 on e-bay, so I wanted to see if I could do it a lot cheaper than that.

I came up with the idea of using my smartphone’s camera flash to trigger an optical switch, and hook the optical switch into the remote trigger port on the camera. I could then write an app on the phone that would trigger the flash at intervals, thus triggering the dSLR to take an image. I happened to have an optical sensor for triggering flash heads (I use these sometimes for strobist work). This did not work. Maybe it needed a small voltage to operate. Anyway, I headed out to my local Maplin store, and got myself a phototransistor (SFH300-2) at about €2.49. I had a spare shutter release cable lying around that I got off ebay for about €5, so I took the switch off the end and replaced it with the photo-transistor. Nothing else, just the photo transistor directly wired to the shutter release port of the camera. 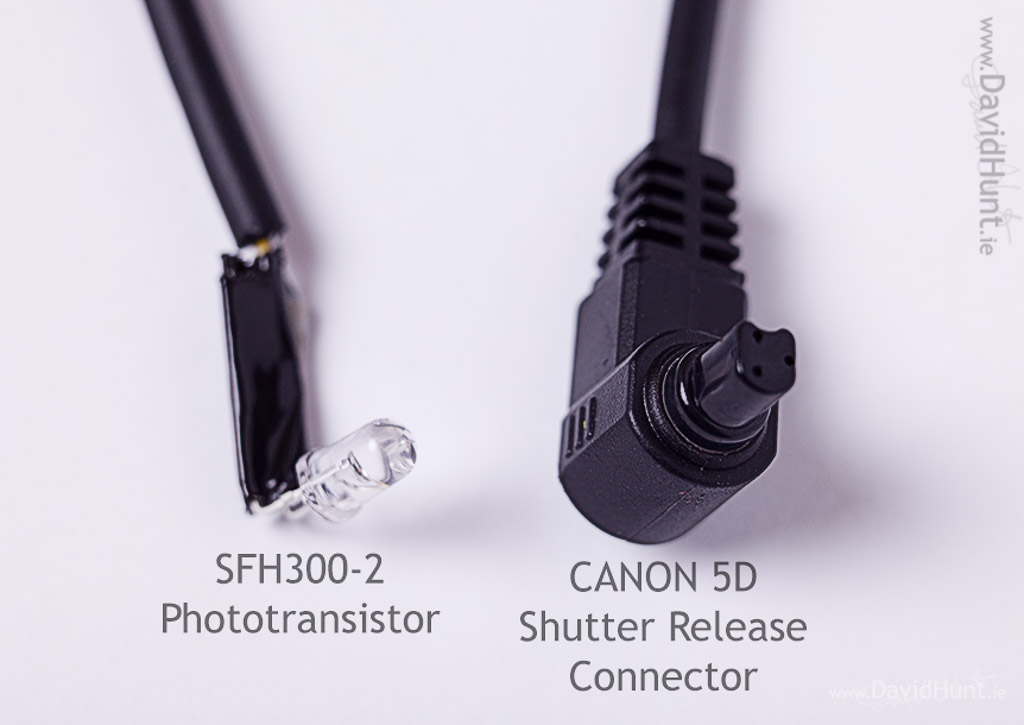 So, the theory worked. One photo-transistor connected to the shutter release port of the dSLR was the hardware side sorted. Now for the software side.

Before investing in a few dozen hours getting the development kit for the iPhone, I took a quick look at any apps already out there for the iPhone that might do the job. Sure enough, there were a couple of apps that do just what I was looking for, and they were free. The one that I settled on was “Canopy Camera Tools” app, that had an intervalometer built in. It would take a picture at pre-defined intervals, and if I set the flash to be always on, this would trigger the dSLR, and I could then throw away the images taken on the iPhone, using the dSLR images for my time-lapse video.

So, with Canopy installed on the iPhone, I duck-taped the phototransistor in place on the back of the iphone, and took my very first time-lapse video. 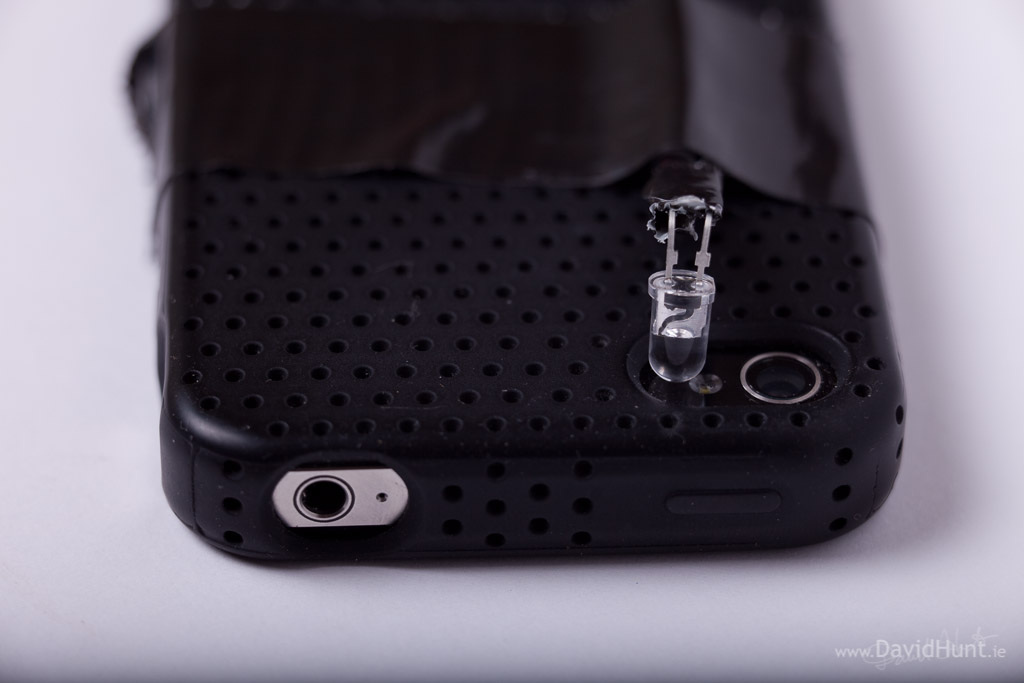 I set the phone to take 160 images at intervals of 3 seconds. Because the flash duration on the phone would cause several shots to be taken for one shot on the iPhone, I set the dSLR to 2 second timer. Once I’d taken the shots, I loaded them onto my PC, re-sized them down, and used a free application called “PhotoLapse” to stitch them together into a video. The result is here. Very rough, long lens pointing out a dirty window. But you get the idea. 🙂

Once I proved that it all worked, I made an enclosure that would fit around the top of the iPhone, and hold the photo-transistor in the best position to be triggered by the phone’s flash. 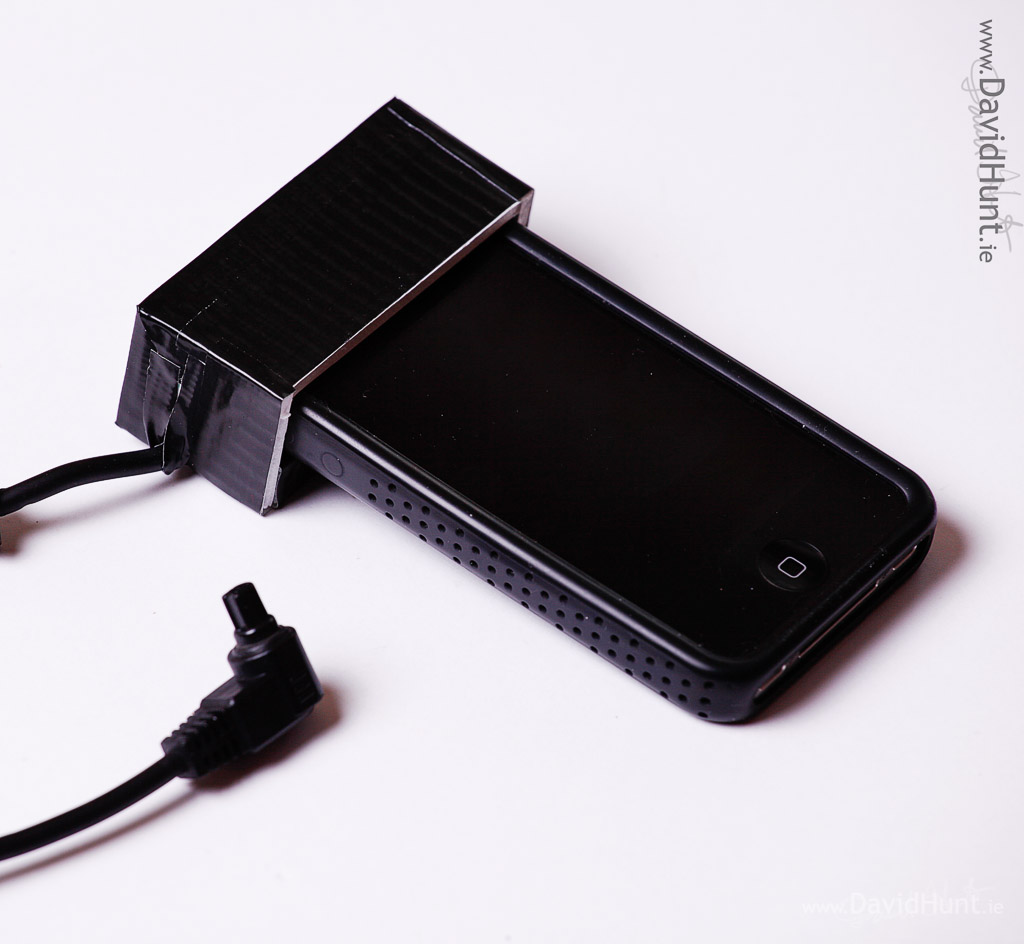 So, I guess I could stretch the truth and say that this is an intervalometer solution for €2.49, but that’s assuming you have a dSLR shutter release cable that you can hack and a smart phone with suitable software. Even then, the shutter release will only cost you about €5. I believe it’s the cheapest solution around for time-lapse videos with a dSLR. 🙂

—Edit—
So, I found DSLR bot has a very similar solution, except that it uses a couple of IR-LEDs driven from the audio-out port of the iPhone. I found an old TV remote control and ripped out the two IR-LEDs from it, put them onto a 3.5mm stereo jac plug, and bought the DSLRBot app at €3.99. So, I’m sure you’ve got some old tv remote controls, and a stereo jac plug lying around, that’s all you need. For build instructions, check out the DSLRbot web page.