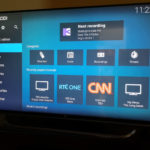 I decided a few months ago to cut the cord and get rid of my Sky TV subscription. Between a combination of purchasing and returning a Saorview Connect box, and trying out various front ends, here’s the end-result, and I’m delighted with it.

Our family are light enough TV users, usually sitting down in the winter time to watch a pre-selected TV programme that we’d recorded via series link, or something on Netflix. So paying the €46 per month for the basic Sky package (including the (€15 they charge for the luxury of High Definition) no longer seemed worth it. I started researching alternatives.

One option I came across was Saorview Connect, so, without doing much research, I purchased a box for €150 in Currys  (knocked them down from €160 using the price guarantee, Harvey Normans had them for €150). I installed it at home, and got the Saorview channels working no problem. But I couldn’t find the Satellite channels, so I gave Saorview Support a call. They showed me how to get the satellite channels, which involved going into the setup menu, and switching the “mode” of the box from Terrestrial to Satellite, which involved navigating down through the setup menu, changing the mode, watching an excruciatingly slow transforming logo, and then entering Satellite mode. No EPG, just a simple list of available channels. And it took about 20 seconds! Every time you wanted to switch!

No EPG, No integration of terrestrial channels with Satellite channels, no “what’s on now and next”, just a list of channels. I was still on the line to the Saorview person, and did point out that this was pretty awful.  They said they were limited by the fact that they didn’t have the relevant rights to the EPG data in order to be able to integrate it into their EPG, and there was no plan to integrate the satellite channels, and it was unlikely that they would ever be integrated. They were almost apologetic when describing this mad situation. I thanked them for their time, ended the call, unplugged the box and promptly brought it back to Currys where I got a full refund. When describing my issue to the nice person in Currys, they could believe it either, so they promised to notify potential customers of this “limitation” with the Saorview Connect box in the future.

So after that experience, I decided I’d better do better research for whatever solution I settled on. My list of requirements were something along the lines of the following list:

And I think I’ve manged to achieve ALL of that, plus a few extra bits along the way. Here’s a look at the TV interface.

As you can see, I have Terrestrial and Satellite channels all on the same screen, with days worth of information available to set recordings, timers, etc.

So back to the beginning. Gathering the signals into one point. For this I needed the capability to have DVB-T and DVB-S signals coming into one point. I’d heard about a piece of software that runs under Linux called TVheadend, so I decided to give that a go. There was lots of good information in the HTPC section on boards.ie, including a recommendation on an excellent Satellite to IP box called a Telestar Digibit R1, which can take in 4 DVB-S satellite signals and convert them to IP streams. Also a good way to get in the terrestrial signals was to use DVB-T USB adapters. So, I ordered the parts.

The Digibit R1 was about €130 incl shipping from Amazon.de. Amazon.UK was significantly more expensive, so I created an account on Amazon.de and ordered from there.

The Digibit R1 connects to the Ethernet network and is picked up automatically by the TVheadend software. These were fed from a new Satellite dish with a 4-way LNB that I had lying around in my garage. The Sky man left it there after my Sky HD install a few years ago, he made use of the old dish and cabling, and gave me the new dish for future use. It’s ironic that I used it to get rid of Sky altogether.

For the Terrestrial signals (DVB-T), I got two DVB-T USB adapters.

They’re connected to a nice tidy yagi antenna pointing at the local transmitter which is not too far away from me on a nearby hill.

So, now that I’ve got 4 DVB-S inputs and two DVB-T inputs, what do I connect them to? Well, I mentioned the TVheadend software. That runs on a small single board computer. I had thought about using a Raspberry Pi 3, but I thought that I’d be on the safe side by using an Up Squared, which is a bit more powerful. A Raspberry Pi 3 would probably be fine, though. I was saving my Raspberry Pi’s for use elsewhere in the system, as described later.

So the Digibit R1 is connected to TVheadend via Ethernet, and the DVB-T USB adapters are connected via USB from a USB HUB. Once the Linux drivers were correctly compiled and loaded, they appeared as sources in TVheadend. Note: getting the drivers installed took A LOT of time. Lots of trial and error. I have now switched to newer adapters that work out of the box with Linux. I should have done that from day one, but hey, it was a learning experience.

So here’s what the various inputs look like in TVheadend:

The first adapter is an Asus U3100-mini DVB-T receiver, only capable of DVB-T. However, it’s interesting to note that the second receiver is capable of receiving two types of Cable TV signals, as well as DVB-T. I’m only using the DVB-T capability. And they you can see the 4 DVB-S inputs of the Digibit R1.

The setup of TVheadend took several days. Set it up, go down the wrong path, delete everything, start again, fail again. This went on several times until I eventually got the setup right. It’s a pain in the ass. But it’s working now. I have about 990 services appearing in the list of available services. Many of those are radio, and many are encrypted. So then I had to start the configuration of which channels I wanted to appear on my front-end. I narrowed it down to about 40 channels, almost all High Definition. Damn TV3, it’s still not available in HD on free-to-air (or Virgin Media 1 as it’s called now).

You can also view the EPG data in TVheadend:

So, that’s all the back end stuff that nobody else in the house is really interested in as long as it works. Now onto the front end(s). 🙂

For all the TV’s in the house, I use the same hardware and controller. Each TV has a Raspberry Pi 3 connected to it with a Microsoft RC6 IR receiver and Remote control.

Here’s the Pi in the front room encapsulated in a nice case with the Raspberry Pi logo:

I got some Microsoft MCE remotes from eBay. This was so my “users” would have a common experience in each room there’s a TV.

The remote integrates with Kodi straight out of the box, no configuration needed, and works nicely without having to re-map buttons, etc. Works really great.

So now to the front end itself. With Kodi, you have a menu on the left for Movies and TV programmes, which you can point at your media collection (if you have one) which gives you really nice integration of your media collection and TV. Here, I’m more interested in the TV menu and how the satellite and terrestrial channels are integrated into the EPG (Electronic Programme Guide).

The Kodi PVR (Personal Video Recorder) plugin allows connection to the TVheadend software, and pulls all the channel information from that and presents it on the front end interface on the TV. There are two main ways to view the channel listing, one is the plain channel list:

And the other is the EPG:

As you can see in contains both terrestrial and satellite channels integrated nicely into the same EPG, something that the Saorview Connect box cannot do (and will likely never be able to do).

Clicking on a program allows you to switch to it, record it, or set a timer. The timer option is very powerful, it can do a match on all future instances of the program, and it can be multi-channel, etc. The rule setup is very powerful, but nice and easy for the default options which gives you something very similar to series-link. It’s normally pretty accurate, and can be set to record a pre-defined amount of time before and after your programmes to be sure to get the start and end.

Oh, and it’s worth showing this picture again and pointing out the hard drive:

The hard drive is connected to the Up Board via USB 3 interface and is where all the recorded programmes are stored.

So any live TV channel or recorded programmes can be watched on any TV in the house or any device with Kodi installed (with the PVR plug-in) including smartphones and tablets.

My main TV is a smart TV, so I have the various catch-up apps installed, RTE Player, TV3 Player, and I also have Amazon Fire TVs for BBC iPlayer, All4, ITV Hub, etc. That’s all still a bit messy, I need to do a bit more work on those to make them more seamless.

I can also VPN into the house remotely, but the bandwidth required is quite significant, so I don’t tend to get something that’s watchable, so it’s not something I do on a regular basis. I do however, log in to use the EPG and set recordings. Very handy.

I know this blog post is light on detail, but it’s not meant to be a step-by-step guide on how to set all this up, it’s more of a show-and-tell article to give people and idea of the type of setup I built in order to replace the single-box Sky TV installation I used to have in the house.

At the request of Ric in the comments, I’ve added a list of the most common items I used in the installation. Some of them you’ll need to search for yourself, but I’ve linked to the item I got, whether it was on Amazon or eBay.

If it’s not linked, then that means I’ve had a look for it and could not find it anymore, like the Asus U3100, but the DVB-T alternative listed is easier to find and just as easy to use.

It’s not an exhaustive list, there was the satellite dish, the yagi antenna, co-ax cable, ethernet cable runs, cable ties, etc. Thanks for the suggestion, Ric!

Note: After about 18 months of using this, we’ve now got rid of all the NowTV boxes and barely use the Amazon FireTV units. There’s more than enough TV for us using the free-to-air channels, and my family are now familiar with the Kodi interface for channel hopping, recording, playback, live-tv pause, etc. It’s really nice to be able to watch any recording on any TV in the house, and it’s the Raspberry Pi’s using LibreElec (Kodi) that get’s the most use.